In 2007, whilst paying one of his regular visits to the Japanese students’ graves, Rev. Sato was delighted to chance upon the nearby resting place of the late Prof. Alexander William Williamson, and his wife Catherine, who generously hosted the students during their time in England; even going so far as to care for Kosaburo Yamazaki in their own home when he became terminally ill. It was in fact due to Professor Williamson’s help that Yamazaki’s Japanese friends were able to construct a grave for him at Brookwood in 1866; the oldest Japanese grave to be found in the West.

In 2012, through mutual co-operation between Three Wheels and representatives of the Satsuma, Choshu, Tosa and Hizen clans, together with the descendants of those early student pioneers, a monument of gratitude and respect for Prof. and Mrs Williamson was erected in Brookwood Cemetery. 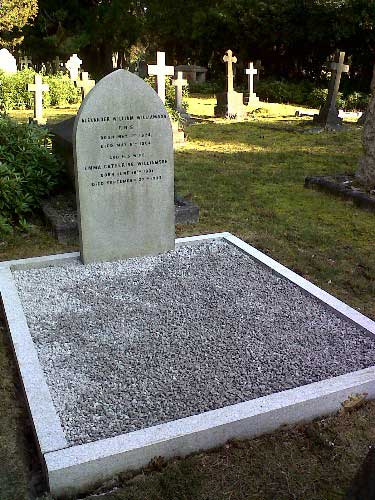