In the summer of 2007, under the supervision of Masayuki Ogawa, a Stupa to contain the ashes of departed Buddhists of all traditions was constructed in Brookwood Cemetery outside London. The scheme originated in a bequest by Reverend Zenko, a Zen Priest who died on 19th February. Venerable Chimyo Takehara decided that, as the best way to use the bequest, it should go towards building a Stupa, and this idea was warmly welcomed by Reverend Zenko before he died. 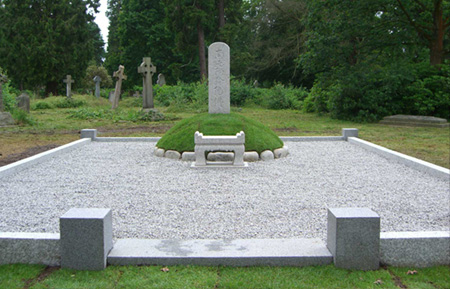 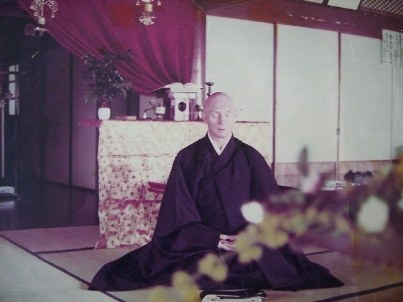 This talk was given at the Inaugural Ceremony of the “Stupa of Namu-Amida-butsu” on the 7th October, 2007.

Thank you all very much for coming along to the Inaugural Ceremony of Three Wheels’ Buddhist Stupa of Namu-Amida-butsu.

First of all I would like to say a few words about how this Stupa of Namu-Amida-butsu came to be erected here in Brookwood.

When I first came over to this country to practise Buddhism, the intention of my master, Venerable Chimyo Takehara, was that we should strive to foster mutual understanding and spiritual exchange in the context of Anglo-Japanese relationships, and at the same time seek to help Japanese people resident here on the path towards inner peace through true encounters and re-encounters with people from other traditions.

At around the time that we were looking for ways to promote the peace and happiness of Japanese residents in this country, I learned of the existence of four graves in Brookwood Cemetery, made for Japanese students who had died in this country about 140 years ago. I found it profoundly moving to see for myself the courtesy and compassion with which in a bygone era these four young men had been laid to rest by their English friends in English soil.

Given its vital importance as the starting point of the long history of Anglo-Japanese friendship, the story of the four graves deserves to be passed down from one generation to the next. Over the following ten years, ever since we first came to know of their existence, we have continuously been visiting these graves, together with Japanese Dharma friends, young and old, to express our respect and gratitude not only to those students who died here in the shadows of others more fortunate than themselves who were able to return to their native country and pioneer the modernization of Japan, but also to their English friends who showed such consideration towards them a hundred and forty years ago. In this context I have to mention the name of one individual in particular, Professor Alexander Williamson, who looked after Japanese students at that time with the greatest kindness. It is said that the earlier of the two groups of Japanese students who came to UCL actually stayed at the professor’s house and that some of them were enrolled in his class on Analytical Chemistry. One of the four graves in Brookwood, that of Kosaburo Yamazaki, is actually the oldest Japanese grave to be found in the West, constructed as it was in 1866. When Yamasaki fell seriously ill due to poverty and the bitter weather, Professor Williamson and his wife cared for him personally in their home until the very end of his life. With Professor Williamson’s help Yamazaki’s Japanese friends then constructed a grave for him here at Brookwood. Only two weeks ago, to our great surprise and delight, we ourselves actually managed to locate Professor Williamson’s own grave in this same cemetery. So overcome was I to see his headstone, I could not help prostrating myself before it. In the back of my mind I suspect I was also thinking of another example very close to us in our own century of British warmth and compassion, that of Professor John White.

Two years ago an English Zen monk, Venerable Zenko Croysdale, came to visit me at Three Wheels and spoke to me of his intention to leave us a bequest in his will. When I talked about this to Venerable Takehara, my master suggested that, based on this bequest, we might try and construct a grave site, free of all discrimination, for all Buddhists of any tradition.

Three months ago Mr Masayuki Ogawa, a Japanese garden designer from Kyoto, and six other Dharma friends flew over to London to start work on the site and the Three Wheels’ Stupa of Namu-Amida-butsu was born. On arriving in London, one of these friends remarked to me, only half jokingly, “Kemmyo-san, we are here to make your grave.” For two weeks all the Dharma friends worked very hard indeed. Once again, regarding the details of the design and the work process itself, we are very much indebted to Professor John White for his invaluable help and advice. As a result, our beautiful Stupa of Namu-Amida-butsu has now come into being. Of course, it’s not only for me, but for anyone of you who would also like to have your own ashes laid to rest beneath its granite stone.

The central granite monument was carved in Kyoto by Mr Kinzo Nishimura, the best stonemason in Japan. The strong and beautiful calligraphy inscribed on the granite was executed by Venerable Chimyo Takehara, modelled on Shinran Shonin’s own writing of Namu-Amida-butsu.

There is a phrase in the Amida Sutra “[We all] meet together in one and the same place (the Pure Land).” The Stupa of Namu-Amida-butsu symbolises the Pure Land where Amida Buddha welcomes all those who pronounce his Name with all sincerity. Under the Stupa there is a rectangular space surrounded by panels of grey granite where the ashes of the deceased can be placed. All their names will be set down on a traditional Japanese scroll and preserved in a beautiful box, skilfully decorated by means of the ancient craft of kirikane (application of cut metal foil) by Mrs Sayoko Eri, honoured in Japan during her life time as a living national treasure. Regretfully I have to tell you that Mrs Eri has herself now died overseas, a few days ago, whilst on a trip to London and Paris to demonstrate her art to the West.

For Three Wheels, the grave site for the four Japanese students has been an enduring symbol of the Anglo-Japanese friendship from the past continuing through the present and on into the future. I have to say that our gratitude to the British people for all that they have done for us Japanese, as demonstrated by the story of the four graves, is greater than we can ever hope to express. We are also very grateful to the Serbian Society for the care they have taken over the last two decades in tending those four graves located within what is effectively the Serbian Society’s own grave site.

Now that Three Wheels’ Stupa of Namu-Amida-butsu has been built here, this small area of Brookwood Cemetery has been opened wide to all Buddhists of any tradition, and to all our friends who might feel sufficiently comfortable with our Buddhist way of living.

To conclude this brief talk of mine, I would like to express my deepest gratitude to all the British and Japanese who have helped realise this wonderful project, especially to my master, Venerable Chimyo Takehara, whose original idea it was and who has come over to London, despite the condition of his health, in order to celebrate the completion of this Buddhist Stupa, accompanied by his Dharma friends and Gagaku musicians.