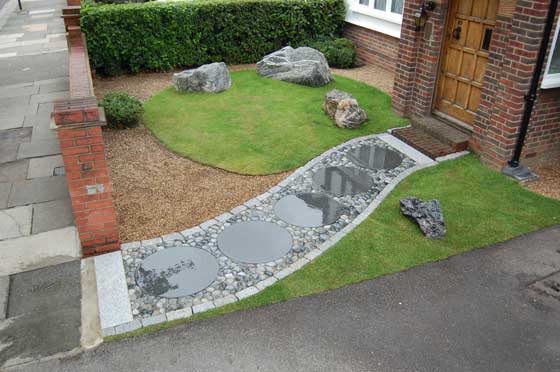 The transformation of the gardens of Three Wheels and its two Taya Houses is now complete.

The story began with the making of the Zen Garden of Three Wheels itself in 1995-96 and its inauguration by the Venerable Chimyo Takehara, the Head Priest of Shogyoji, in 1997, by which time the front garden had also been transformed. It continued with the remodelling of the two gardens at Gyosen Taya in 2002. Then, in the summer of 2009, the stepping stones were laid in the refurbished rear garden of Tenrin Taya in order to make a satisfactory path across the lawn to the main house and Buddha Shrine next door..

In each case, the actual process of construction was only made possible through the hard work and expert supervision of Masayuki Ogawa, who, apart from all that, came to England each year to carry out the specialized pruning of the trees surrounding the Zen Garden.

Finally, the work on the front garden of Tenrin Taya began in 2010 with the search for three or four really fine rocks, a task in which Izumi Ida, who, as a Trustee of the London Shogyoji Trust, had played a major role in helping to raise the necessary funds, took an active part.

The exceptional, main rock was, by great good fortune, found in the vast stone yard at West Thurrock close to London, where it was the one and only rock that could possibly have served that purpose. We were equally, or perhaps even more lucky, to find the other rocks that were needed in a tiny stone yard in Northamptonshire.

The installation of the four rocks was carried out in early July, as always under the supervision of Masayuki Ogawa, leaving the replacement of the very undistinguished asphalt path for his visit in 2011.. When he was shown the proposed design, centred on five large, pefectly round stones, he observed that such a thing was never done in Japan, where the geometrically cut stones used for ornamental paths were invariably square, rectangualar or diamond-shaped. To which the designer immediately replied “Good! In that case we shall again, as in the case of the Zen Garden, be doing something that is really new”.

All the materials were then ordered, including the five black basalt roundels from China, the large pebbles to surround them, and the Cornish granite setts for the borders, and then stored, unseen in the garage. There were then some months of uncertainty, since no one, including the designer, was at all sure whether the result would be a success or not.

However, when Ogawa san returned in July 2011, the first order of business was the re-siting of one of the three main stones, which was twenty or thirty centimetres out of position.

Fortunately , when the work on the path was finally all done, with the main stones in place and all the pebbles which were suitable carefully selected one by one, and laboriously set in place by hand, everyone was happy, not only with the path itself, but with the garden as a whole, and especially with the way in which the light grey of the roundels, when they are dry, become a rich, deep black when it rains, and all the colours of the pebbles shine out.

Now, finally, as had always been the underlying purpose, the inner relationship between Sanrin Shoja, Gyosen Taya and Tenrin Taya is given clear expression in the visual kinkages between the three front gardens.