On 15th June 2003 Reverend Kemmyo Taira Sato, Director of Three Wheels, was re-ordained, and a young priest of Shogyoji Temple, Shomyo Hatae was ordained, by the Supreme Primate of Tokyo, Higashi Honganji, His Eminience Otani Koken.

A young person who observed the ceremony said:

“In many ways it was as if witnessing two aspects of the Buddha. In Kemmyo-sensei I saw an experienced and wise teacher becoming a beginner again, affirming himself as a student and a child of Amida Buddha. And from the other aspect I saw Shomyo-san, a young person, accepting his karma as a gift from the Buddha and truly becoming an adult in preparing to help other people with their own karmic circumstances. I would like to thank both of them for going to the Buddha and returning to us with the gift of the Dharma.” 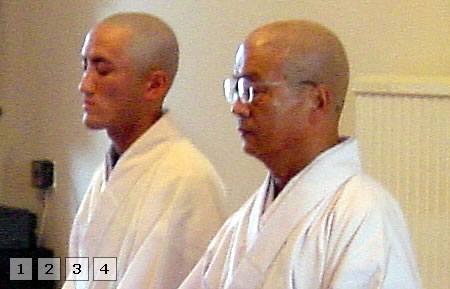 Family and friends of Reverend Sato and Hatae-san gathered to encourage, support and thank them as they undertook the ‘Ordination (Tokudoshiki) Ceremony’. 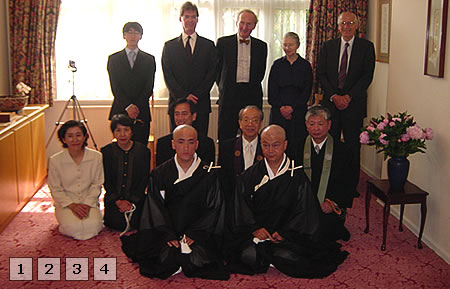 Also on the 15th of June 2003 twenty one Dharma friends of the Three Wheels Samgha, of various nationalities, received the ‘Ceremony of Confirmation in the Shin Buddhist Tradition (Kikyoshiki)’ from His Eminence Otani Koken – who is a direct descendant of Shinran Shonin and therefore a living symbol of Jodo Shinshu teachings.

In the picture below the candidates sit before the Buddha Shrine and chant Master Rennyo’s ‘Gaike-mon’; which expresses gratitude for the gift of Entrusting Faith. The calligraphy on their white robes reads ‘Taking Refuge in the Buddha’. 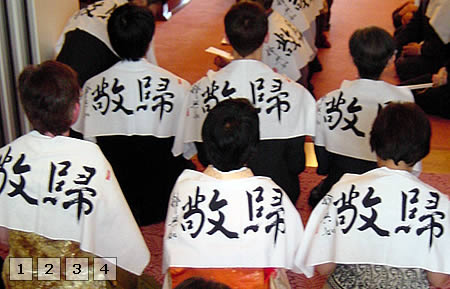 After the ceremony there was a celebration party and many people enjoyed speaking with the Supreme Primate and his family, and thanking them personally for their support of Shin Buddhism in the United Kingdom. It was truly beyond words that people of all nationalities, races and cultures were able to come together as one in the act of taking refuge in the Buddha.

Thinking about all the people who played a part in making the magnificent occasion possible a young follower quoted gratefully the words of Master Shinran:

“My wish is that those who have attained Birth may lead those who come after them, and those who aspire for Birth may follow their predecessors, thus following one after another endlessly and uninterruptedly until the boundless sea of birth and death is exhausted.” 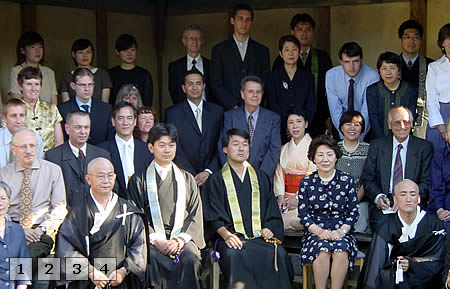