Over 60 participants joined our annual New Year Ceremony held on the 1st January 2016 including a number of first time visitors who came to celebrate the New Year at Three Wheels.

Following the chanting of Sutras we all had the opportunity to join the traditional Otoso ceremony in which we receive before the Buddha Shrine a few drops of sake poured by one of the priests. This special ritual signifies our receiving a drop from the stream of the Buddha’s teaching and that of the founder of the Shin Buddhist tradition Shinran Shonin. Having thus been refreshed we can look forward to the New Year. 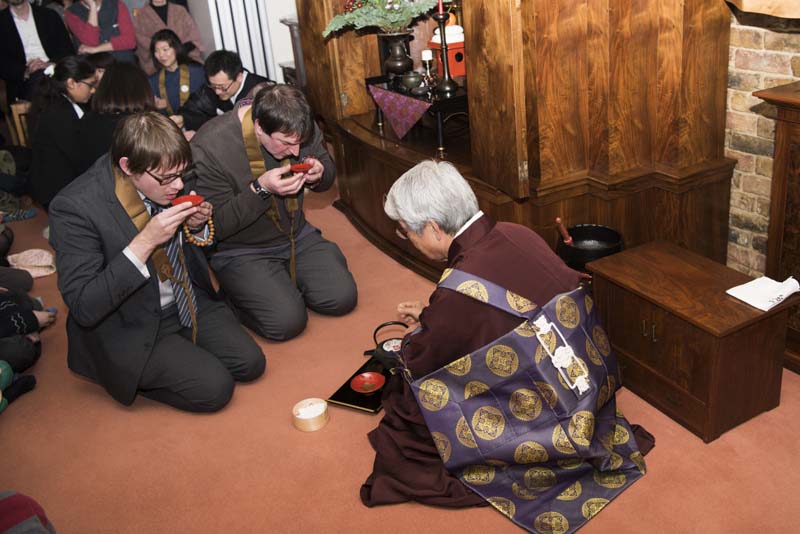 In his Dharma-talk Rev. Kemmyo Sato reflected on two important themes which are especially meaningful at the New Year, namely ‘Peaceful Awareness’ (Anjin) and ‘Impermanence’.  During his visit this autumn to Three Wheels parent temple Shogyoji, Rev. Sato re-encountered the meaning of ‘Peaceful Awareness’, through the atmosphere of the temple Sangha whose followers showed such a deep awareness of the reality of their lives and the great unconditional love of Amida Buddha surrounding them.

Although New Year’s Day is a very small point in the fast and ever changing reality of our lives, Rev. Sato impressed upon us that it is an important opportunity to become aware of the impermanence of the world and especially of each other. Knowing in our encounters with others that they are constantly changing, just was we are, we should be mindful at all times that what we know of another person is only a tiny part of his or her whole being.  We should therefore try in our mutual encounters to listen with respect to each other and also to live our lives to the fullest extent, treasuring our every step in the here and now.

After Rev. Sato’s talk some of the new visitors introduced themselves. Among them was a lady who had recently been introduced to Three Wheels through a Dharma-friend of the temple and wanted to experience for herself its atmosphere. Coming from the Hindu tradition she was very happy to find a deep oneness between the teaching of Hinduism and Buddhism though hearing Rev. Sato’s talk on the meaning of ‘peaceful awareness’  and ‘inner peace in the spiritual world’.

Another visitor, who had lived in Japan for twelve years before returning to London in 2012 expressed his happiness at finding a Buddhist temple so close his home.  Although he had the opportunity to visit many temples whilst living in Japan in was not until his return home that he awakened an interest in Buddhism and was very pleased to be welcomed to Three Wheels.

Rev. Kenshin Ishii thanked Rev. Sato for his talk which reminded him of the need to put aside limiting thoughts about others in order to experience a true spiritual encounter with them.

After the meeting we all joined together for a joyful meal in which we could enjoy meeting new friends and old. We were also very fortunate this year to have Prof. John White on hand to introduce the new visitors to the Three Wheels Zen Garden which was looking especially beautiful on this rather austere winter afternoon.

My awareness, your awareness. Let’s share our awakening! – Report on the 16th Spring School.

Posted On April 15, 2017
This year, we welcomed 12 young pupils ages 12 and 13 from Japan. It was the longest session in the history of Spring School and…

Three Wheels was visited by a group of students.

Posted On June 21, 2017
Beginning of June, Three Wheels welcomed a group of students from Wycliffe College and their visit is reported on the website of the school. https://www.wycliffe.co.uk/japanese-trip/…

Letter of thanks from Three Wheels